Posted on February 19, 2011 by andesnotthemint 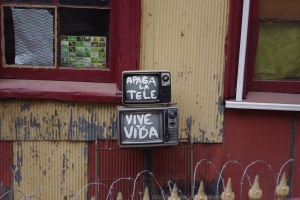 Lex and I have stumbled our way down to the Southern Hemisphere, into the lazy days of Chilean summer. We arrived in Santiago early Thursday morning,  cleared customs and experienced the beginning of what has come to be known as “Stuffmageddon,” casualty of the novice packer.  More on that to follow, but first a word on format. I (Mark) will cover the basics of our first week here in Chile and Lex will delve into a couple topics, including the amazing eats we’ve had and the above referenced plethora of pooch-folk. 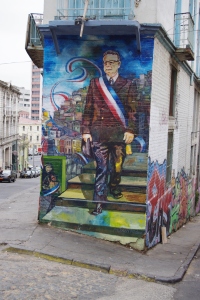 After navigating the bus system we arrived a few hours later in the coastal town of Valparaiso, a city defined by its hilly landscape & artsy vibe. There are murals painted all over town, including the guy to the right who you may recognize as Salvador Allende. Interesting fact, next week begins the long, long delayed official investigation into Allende’s death at the hand of the military some 38 years back.  Chile now, for those unfamiliar, is quite a tranquil & middle class nation as evidenced by 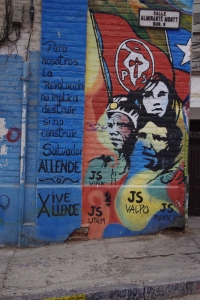 Valpo’s neighbor across the bay Vina Del Mar. Vina is a summer vacation spot for people from Santiago. Imagine if you would, taking a 20 minute bus ride out of Telegraph in Berkeley and somehow immediately winding up in La Jolla or someplace in South Florida. The two cities could not be more different.

Anyhoo, back to Valparaiso! We spent the last few days wandering the city’s many hills and neighborhoods enjoying the sites and sounds. Just across from our first place of lodging, there was an impromptu public theater performance, pictured below.  This was by far the best thing about Casa Limon Verde, which became known to us simply as “The Dank,” a title given to capture the climatic condition in our room. 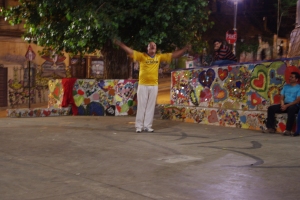 The leaping gentleman you see on the left gave quite a performance, sending up various characters typical to life here in Valparaiso. Although I could only understand about a quarter of what he was saying it was entertaining nonetheless.

Walking around Valparaiso can get tiring fairly quick, unless you happen to take one of several ascensors, or elevators, located around town. For roughly 25 to 75 cents US, you can hop into an ancient pulley car and get lifted up the hill (cerro) or gently lowered back down. To the right is the ascensor headed to/fro Cerro Concepcion–the neighborhood our new hostal is located in.

That’s right, The Dank forced us to shell out a bit more for far nicer accommodations at the Hostal Barrio Paraiso. Speaking generally, between Chile’s rising peso and America’s sunken dollar our time in Chile shall put a hurt on the 7 month budget. Guidebooks printed a couple years ago are a good 20% off on the prices of many things. No regrets though, as tomorrow we set off for the Isle Of Chiloe, beginning our grand adventure through southern Chile. Future posts will describe Chiloe,  Northern Patagonia and The Lake District. Valparaiso has been a lot of fun, but we are ready to head for quieter, more remote environments. I’m also looking forward to getting a little better with the new camera, and this blog thingy. Any advice on either of those topics, much obliged! Next up, a few posts from Andes Not The Mint co-scribe Alexis Burling. 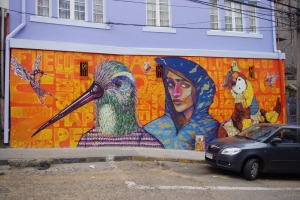